Through art, we can tell stories of pleasure that celebrate the liberating and inspiring side of letting go, being who you want to be, to fully express yourself with no barriers.

The Japanese Film Festival Australia is excited to announce that we have partnered up with Magnum for the JFF Classics program in Sydney! This collaboration reaffirms our commitment to pleasurable moments, great storytelling, and true expression by showcasing two delightful animated films under the ‘Pleasure Tales’ anthology of shorts created by Magnum. Both shorts have a common theme: being true to pleasure, whatever and wherever that pleasure may be. 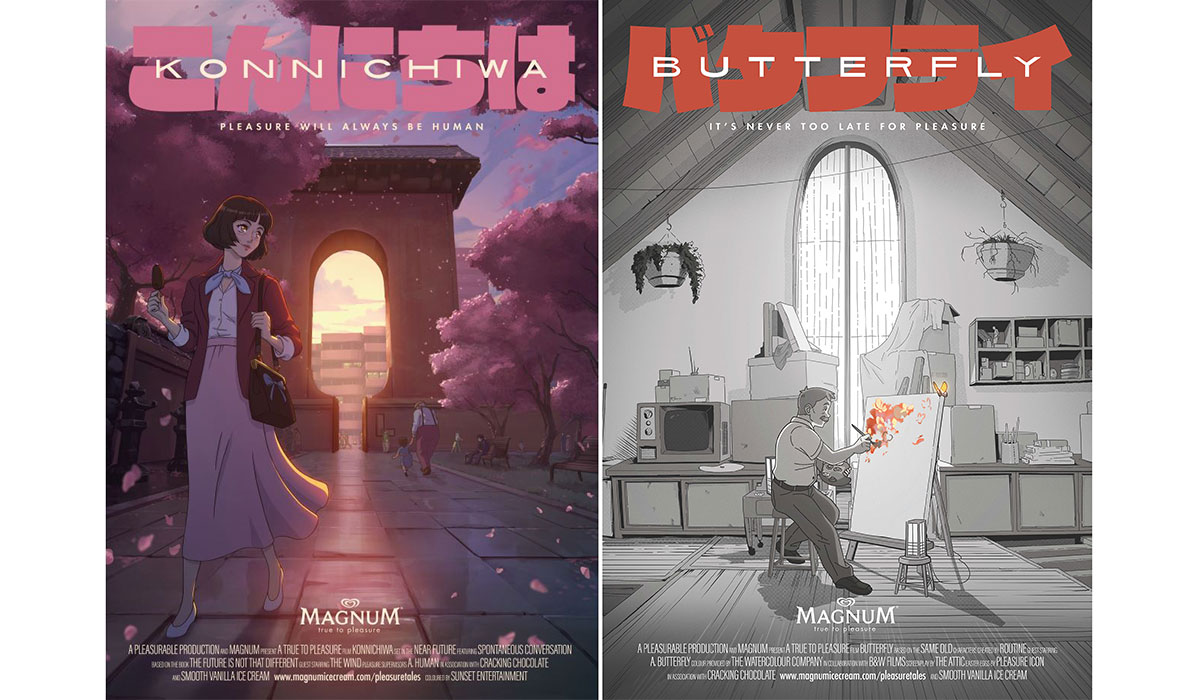 In Konnichiwa, a young woman decides to take a break from the hecticness of the city and head over to the park. There she meets a curious young man. The conversation that ensues between them foreshadows a hidden truth about this mysterious young man.​ We quickly discover these characters are opposite, on one end we have a young woman who is true to her pleasure, and on the other, a young man who can’t seem to find it. With the beautiful colours of a sunset as a backdrop, this chance conversation on a park bench makes for a powerful statement about our very human need to search for pleasure. ​

In Butterfly, we meet an older man who’s been sucked in by routine. Every day he gets up at the same time, puts on a tie, takes the train to work, then back home, and repeats. His life has become grey, and the worse part is he hasn’t even noticed.​ One day, something makes him break the cycle. He’s not sure why, but he decides to get off the train before his stop. He sits down to watch a man painting at a park, a man that looks a lot like him, only a few years older. This small change sets off a chain reaction of events that will end up bringing some colour into this man’s life.

Manga and anime have long been strong storytelling mediums in Japan, and we at JFF always look forward to bringing you the best animated films coming out of Japan year after year. After all, manga and anime have endured as popular means of entertainment as a result of being able to tell magnificent stories. They provide narratives that create a sense of life and meaningful moments, or unlock creativity, opening the imagination to a wide array of possibilities. On top of that, they show us new possibilities for our lives and entertainment, such as Masaaki Yuasa’s psychedelic road trip Mind Game screening as part of the JFF Classics 2020-2021 program.

The beauty of animation is in creating details that cannot be replicated in the real world. Imagination spans beyond the real, and through art you can truly liberate yourself, creating pleasurable stories where you are able to fully express yourself with no barriers.

One Magnum Manga short films will play before each JFF Classics screening from 6 February – 3 March. The short played before each screening will alternate, so watch two or more films in order to catch them both! Head here to view the full program of boundary-shattering films screening for free at Art Gallery of NSW.