There is no denying that Production I.G is one of the greatest anime studio powerhouses of our time. From producing some of the most engaging sports anime such as Haikyu!! (2014), Run with the Wind (2018), and Kuroko’s Basketball (2012), meaningful slice of life anime, namely Kimi Ni Todoke (2009) and Ao Haru Ride (2014), award-winning art films of the class of Giovanni’s Island (2014) and Miss Hokusai (2015, described by French newspaper Le Monde as “a lesson of elegance”), to worldwide fan favourites like Ghost in the Shell (1995), Blood: The Last Vampire (2000) and Psycho-Pass (2012~). Asides from being prominently known as an animation production studio, in recent years they have also been venturing into VR experiences, with their Ghost in the Shell: Virtual Reality Driver (2017) selected for the Venice Film Festival.

Established in 1987 as a joint venture between producer Mitsuhisa Ishikawa and animator Takayuki Goto, the company takes its name from the initials of the two co-founders. They’ve come a long way since then, and this year they have one feature film and five animated shorts in JFF Plus: Online Festival. Read on to learn more about this hallmark studio before diving into JFF Plus on 4-13 December.

You only need a cursory look into the diverse amount of works produced by Production I.G to see the years of experience the studio has in the industry, with many of their works gaining international notoriety. The release of the cyberpunk film Ghost in the Shell (1995) spurred an international cultural revolution, raising it to cult classic status, with James Cameron describing the film as “the first truly adult animation film to reach a level of literary and visual excellence”. Highly regarded as one of the first studios to use digitally-generated animation techniques, Production I.G set a precedent with Ghost in the Shell for how studios would utilise digital animation techniques alongside the traditional methods for years to come.

Five years later, the studio impressed the world with its first full digital animated film, Blood: The Last Vampire (2000), which pioneered the use of highly cinematic image manipulation through an extensive use of After Effects unseen at the time. Interestingly, the same year also saw the release of Jin-Roh: The Wolf Brigade, the last, monumental feature film produced in Japan with hand-painted cells.

With the wide range of works under Production I.G’s belt, it’s difficult to not mention the impact they have had on both the anime industry and global cinema. For example, their earlier works such as Patlabor: The Movie  (1989) and Patlabor 2: The Movie (1993) have been cited by Mexican filmmaker Guillermo Del Toro as one of the main sources of inspiration for the Pacific Rim franchise, while Ghost in the Shell is said to have inspired the Wachowskis for the scifi classic The Matrix (1999). From this alone, it’s clear that Production I.G’s reach goes far beyond Japan.

Production I.G also made a direct mark on Hollywood film in the now cult classic Kill Bill: Volume 1. Enamoured with Ghost in the Shell and Blood: The Last Vampire, one of Hollywood’s most famous directors, Quentin Tarantino, reached out to Production I.G to assist in creating a special animated sequence for his -at the time- forthcoming new project. The character Go Go Yubari played in the film by Chiaki Kuriyama, was also admittedly visually inspired by katana-wielding, sailor suit-clad Saya Otonashi, the protagonist of Blood: The Last Vampire.

Since its inception, Production I.G has been an innovator within the animation industry in Japan and abroad, establishing themselves as one of the greatest animation studios the industry has ever seen. The films presented at JFF Plus are six rarely seen little gems produced by the studio across a decade. Very often they represent the first directorial effort of established animators, or of young creators who later ascended to global fame. And the staff involved is always top class: the whole key animation team of Pigtails, for example, is composed of veterans coming from the best Hayao Miyazaki and Satoshi Kon’s films.

Each film included in this Production I.G programme is a labour of love. Because size doesn’t matter. And the devil, as they say, is in the details. 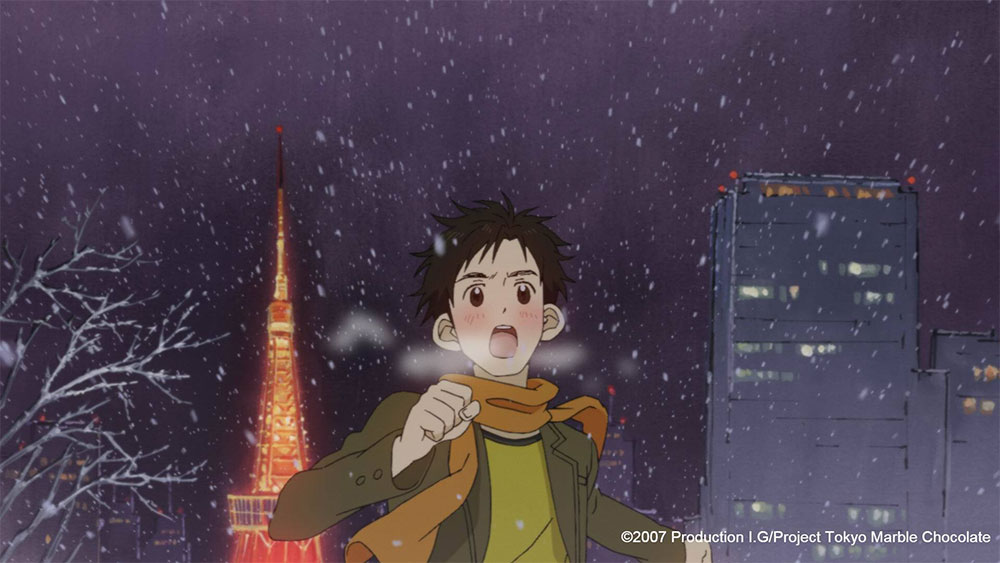 Awarded the Grand Prize in the Feature Film category at the 2008 Seoul International Cartoons and Animation Festival, this charming bittersweet romcom with a twist marks the directorial debut of animator Naoyoshi Shiotani, who only a few years later was going to direct the currently ongoing Psycho-Pass series. It is also the very first project where George Wada, the future founder and president of WIT Studio, is credited as a producer. Shiotani declared he wanted to deliver the story of a clumsy, straightforward, and subtle love between two very special, yet very ordinary youngsters anyone could easily relate with. 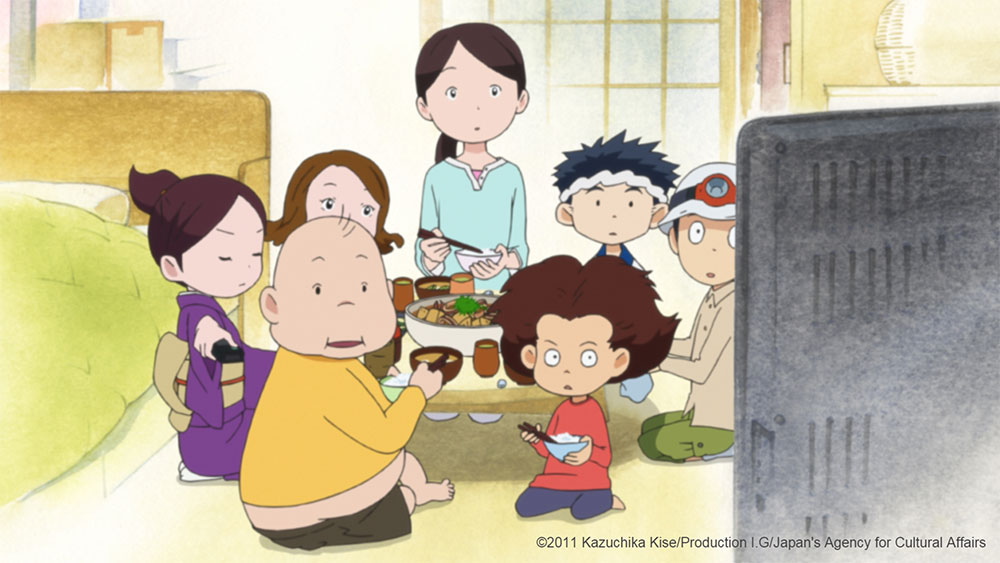 Considered one of the finest animators in Japan, veteran Kazuchika Kise is best known to anime fans worldwide for his work as chief animator in Patlabor 2: The Movie (1993), Ghost in the Shell (1995), and Blood: The Last Vampire (2000). His 2011 directorial debut, however, turned out to be the chillaxing comedy Drawer Hobs, allegedly inspired by his fatherhood experiences. The short was part of the first ever Young Animators Training Project, an initiative begun by the Japan Animation Creators Association and promoted by the Agency for Cultural Affairs of Japan for the purpose of training young animators on-the-job. 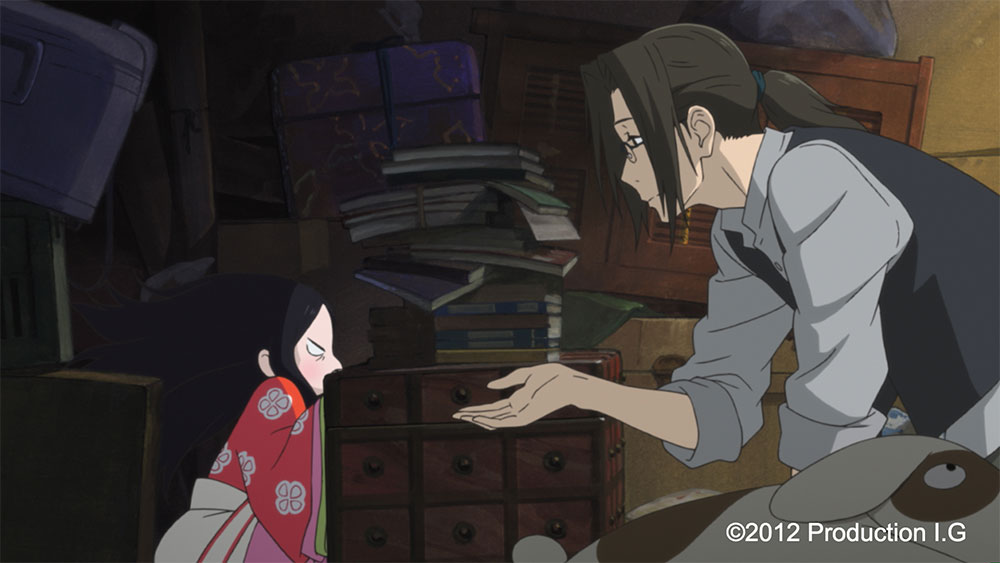 Li’L Spider Girl was originally one of the four segments that made Anime Mirai (The Future of Animation), a collective project sponsored by the Japanese government to foster new generations of animators. It is also the directorial debut of veteran animator Toshihisa Kaiya, already chief animator in IGPX (2005), Tales of Vesperia: The First Strike (2009), and later in the first season of Haikyu!! (2014). Kaiya noted that he likes Japanese ghost stories which could have been inspiration for Li’L Spider Girl. It has won the Grand Prize in the Feature Films category at the 2013 Seoul International Cartoon and Animation Festival and the Focus Asia Jury’s Special Mention at the Sitges Fantastic Film Festival the same year. 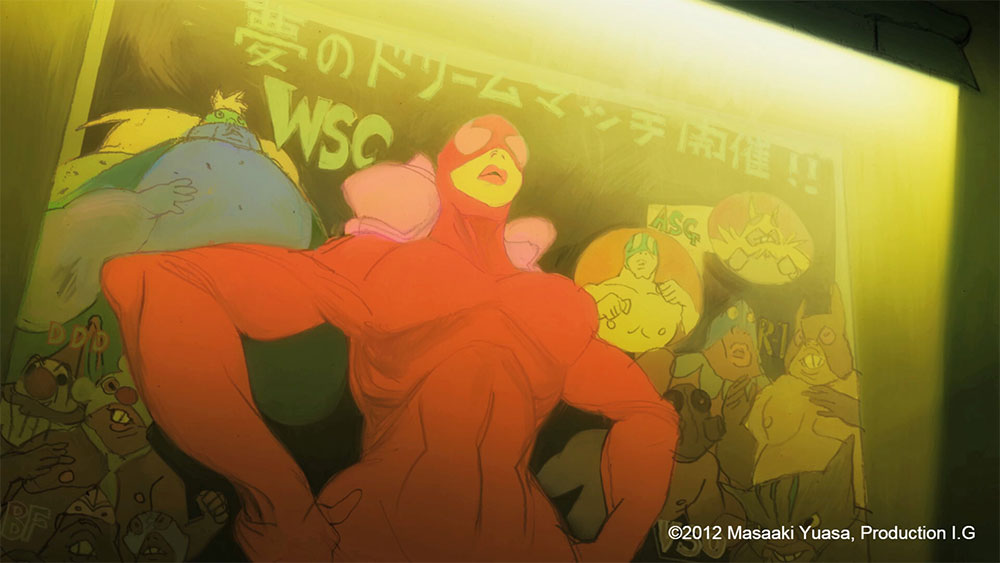 Kick-Heart is Masaaki Yuasa’s artistically driven project that was made possible by a very successful Kickstarter crowdfunding campaign, the very first anime project to do so at the time. Reaching beyond their Kickstarter goal, Yuasa and his multi-national team were able to showcase their skills with no boundaries and experiment with animation. On a side note, the short also features Eunyoung Choi as secondary director and colour coordinator. She’s currently the president of Science Saru, the studio she founded with Yuasa soon after completing this film. Awarded Best Animated Short at Fantasia Film Festival 2013. 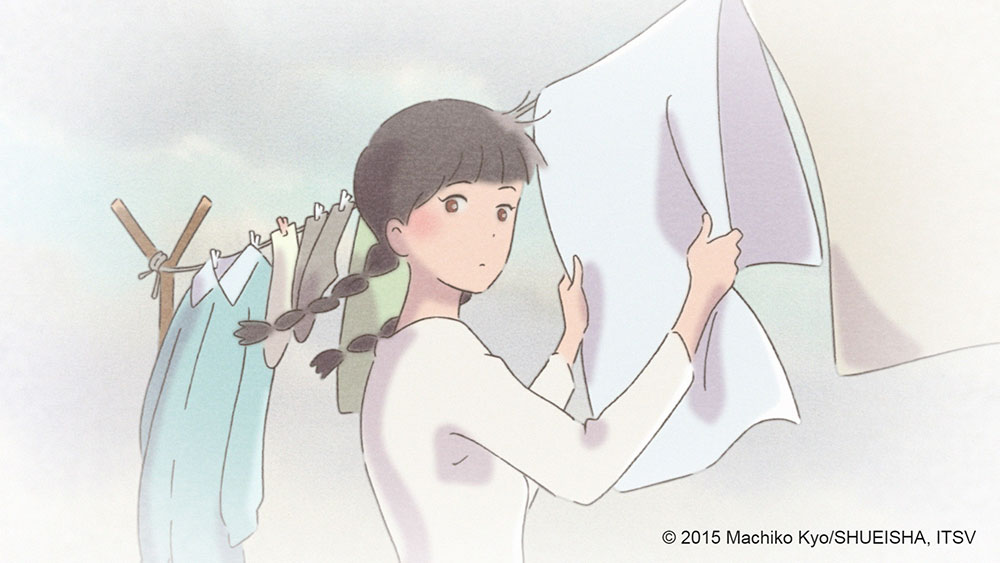 Multiple award-winning Pigtails is the directorial debut of animator Yoshimi Itazu (Miss Hokusai, Paprika, Welcome to the Ballroom). Based on the Osamu Tezuka Cultural Prize-winning comic book Mitsuami no Kami-sama by Machiko Kyo, and visually inspired by Derek Jarman’s garden in Dungeness -an oasis of life and beauty growing in front of a nuclear power station- the film metaphorically depicts the conflicting and unspeakable feelings that engulfed the author in the aftermath of the natural and nuclear disaster of 2011. The short faithfully recreates the contrast between Kyo’s naive-looking designs and the story’s thought-provoking twist, and carries the personal commitment from Fukushima-born producer Keiko Matsushita (A Letter to Momo, Miss Hokusai, Haikyu!!). 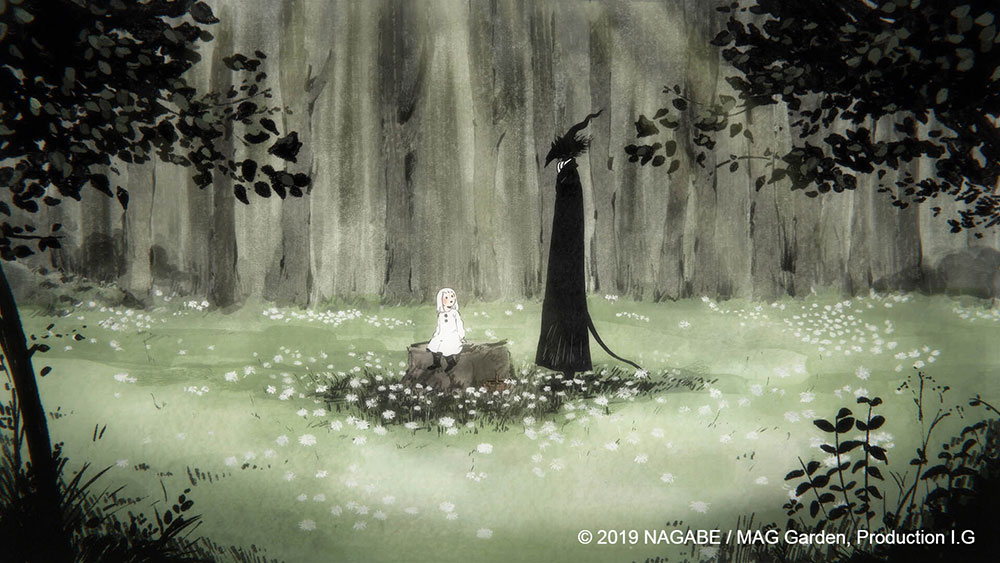 The Girl from the Other Side is the first anime adaptation from the eponymous best-selling graphic novel by manga artist Nagabe. It is also a rare collaboration between a major studio (Production I.G’s sister company WIT Studio, famous for Attack on Titan and Great Pretender) and two young independent creators, Yutaro Kubo and Satomi Maiya, who have been mainly focusing on art-driven, individual-made shorts. While having to cope with a kind of workflow and teamwork they were unaccustomed to, Kubo and Maiya perfectly capture the uniqueness of Nagabe’s art, otherwise difficult to render through the visuals of commercial anime, and decided not to use any dialogue, but instead rely entirely on Schroeder-Headz’s haunting musical score to convey the subtle interaction between the two main characters. Closing film at Fantasia, selected at Clermont-Ferrand, Ottawa, Hiroshima, Stuttgart, and BIAF.

Experience the animated wonders of Production I.G in JFF Plus: Online Festival, streaming for free from 4-13 December 2020.